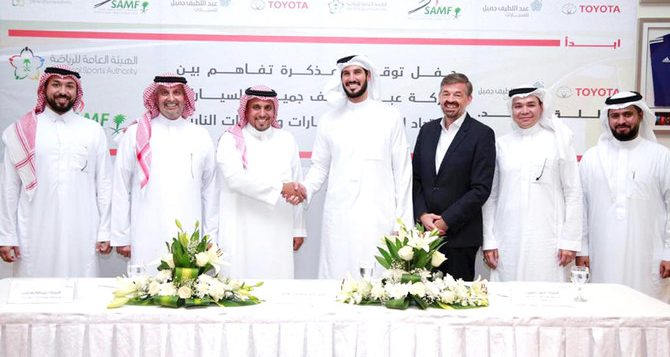 The Saudi Automobile Federation (SAMF) announced the signing of an official partnership contract with Abdul Latif Jameel Motors, the authorized distributor of Toyota cars in Saudi Arabia, in a new initiative for the company to support Saudi motorsports. The contract is valid for three years in its first phase, extendable for two additional years, optionally, and then renewed for another five years.

Prince Khalid said: “This agreement opens new horizons for Saudi motorsports through an exciting partnership with one of Saudi Arabia’s largest and most successful companies. Importantly, Abdul Latif Jameel Motors represents a prestigious automotive brand [Toyota] that engages with a broad range of motorsports around the world.”

“This partnership will pave the way for positive steps that will benefit Saudi motorsports, in particular the next generation of competitors, and is an important initial step in working with the private sector to extend their support to SAMF, its events, and its participants,” he added.

They Just Got Driver’s Licenses, and Now They’re Going Off-Road

The starting line for the Rally Jameel was drawn in 2017, when women in Saudi Arabia earned the right to a driver’s license. Last month, the ceremonial green flag finally fell on the Kingdom’s f ...