Fotowatio Renewable Ventures (FRV) has signed an agreement with the University Instituto de Empresa (IE) in Spain to enable two students from Jordan to study at the university.

The agreement, part of FRV’s commitment to developing communities in which it operates, will see the creation of two scholarships at IE, in partnership with the International Finance Corporation, the European Bank for Reconstruction and Development and French sustainable development organization, Proparco.

One of the scholarships has been awarded to student Sarah Riyad al Atiyat, who began her studies in September 2016. The second will be awarded for the academic year 2017-2018.

As well as FRV CEO Rafael Benjumea and President of IE Business School Diego del Alcázar, attendees at the signing ceremony included the Ambassador of Jordan to Spain, His Excellency Mr Ghassam Abdel Rahim Odeh Majali, and representatives from Abdul Latif Jameel, which acquired FRV in 2015, EBRD and Proparco. 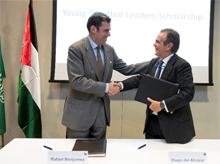 Rafael Benjumea, CEO of FRV, said: “This agreement delivers on one of our top priorities as a business, which is to help develop the communities in which we operate. With these scholarships, we can help give eligible students the opportunity to complete their studies at a first-class university in Spain.”

David Menendez, MD UK, FRV discusses the success and growth of BESS projects and the future for renewable energy ...