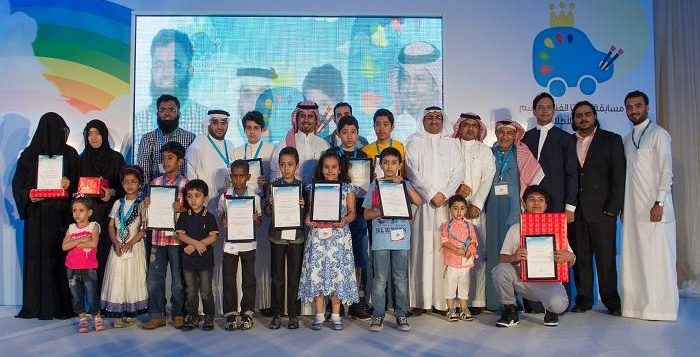 The Abdul Latif Jameel Company concluded its annual Toyota Dream Car Art Contest for 2015, announcing the names of artists who made it to the finals.

The announcement and the handing out of prizes came in a ceremony in Jeddah on March 27, in which several fun activities were held for participating children and their families, along with top Abdul Latif Jameel associates, journalists, and members of the judging panel: Nahar Marzouk, Ahmed Hassan Al Ghamdi, Dr. Effat Fadaaq and Sarah Mansour.

The four-month contest gave thousands of participants the opportunity to show off their artistic talent and express their ideas of their dream cars. The panel chose nine winners in three categories, as well as two new prizes for ‘youngest artist’ and ‘best artwork’. Of the nine winners, one will qualify for the finals in Japan.

Dr. Adel Ezzat, Managing Director of Marketing at Abdul Latif Jameel, was thrilled with the popularity of the contest, “The contest’s popularity continues to grow across the Kingdom, and to prove its effectiveness in promoting art and the spirit of excellence among children and adolescents by invigorating their innovative thinking and futuristic imagination,” he said.

Since 2004, the Toyota Dream Car Art Contest has been spreading the love of automobiles among children and energizing the power of dreams and aspirations by having them dream up their own car designs.

“This annual event embodies the historical relationship between two automotive companies– Toyota and Abdul Latif Jameel,” added Dr. Ezzat. “For the fifth year running, Abdul Latif Jameel is proud to hold a competition that agitates the children’s broad imaginations and pushes them to think, innovate and beautify.”

With a history of more than half a century of outstanding success, the partnership between Toyota Motor Corporation and Abdul Latif Jameel Company has grown into the leading automotive dealership in Saudi Arabia and one of the largest independent Toyota distributors in the world.