Funded by the Abdul Latif Jameel Water and Food Security Lab (J-WAFS) at MIT, Kishor’s research could bring substantial cost and water savings to crop production in the world’s driest regions, unlocking their agricultural potential and helping to address the strain on future food production necessary to meet a rapidly growing worldwide population.

Opening Doors spoke to Kishor about his project and its aims.

What is the main issue you are seeking to address with this research project?

Across the world, we face an acute water and food security crisis over the next 30 to 40 years.

It’s becoming more important to grow food in a more water-efficient manner, which is why greenhouses are becoming more common. At the same time, groundwater tables across the world have been reducing and becoming saltier. In many parts of the world, you can’t cultivate crops anymore because of the salty water. It’s estimated that the revenue loss from salty irrigation waters is around US$ 20 billion every year.

Globally, desalination as a technology for agricultural security is becoming increasingly relevant. And greenhouses around the world have been among the major adopters of desalination. However, the main current desalination technology – reverse osmosis – wastes a lot of water: typically, 30% of well-water is lost as desalination brine. For slightly less salt-rich water, there are alternative technologies, but for waters beyond a certain salinity level (around 700 ppm), reverse osmosis is the only technology currently in use.

As well as being water inefficient and power-hungry, reverse osmosis is like a hammer: it removes everything from the water, even nutrients that are useful to plants, like calcium and magnesium. Growers then have to use fertilizers to put the calcium and magnesium back into the water. So they pay to remove everything, and then they pay to put nutrients back into the water again. That’s very inefficient, and it’s where our technology comes in.

In simple terms, can you briefly describe your proposed solution and how it works? 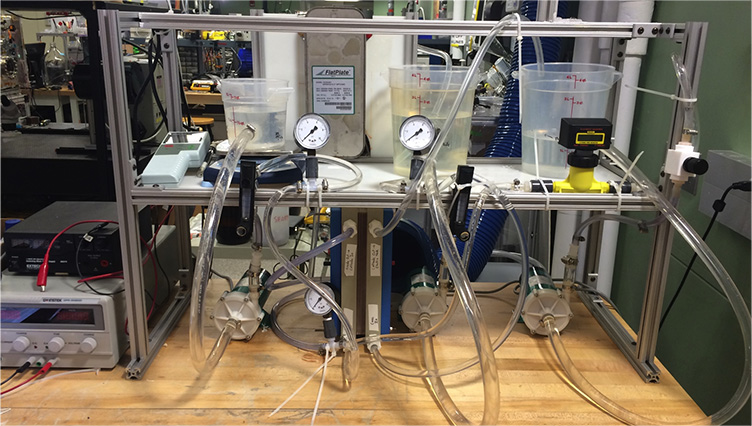 What are the biggest challenges you face over the next two years?

Reverse osmosis is inexpensive, so if you’re trying to improve on it, you need to lower your costs even more. It goes beyond research at this point: we need to get into the business case and break down the costs overall. That’s something we’re working on at the moment. There are only a limited number of membrane suppliers for ISED, so we’re talking to the industry about how we could reduce the costs further.

We’re also trying to capture more information so that we can improve our designs and really tailor each solution to each greenhouse. If you dig a well in one place and then dig another just two miles away, the water can be very different. Some waters have lots of bicarbonate, which can scale your pipes, while others don’t have that issue. Coming up with a system that can easily handle all of these waters is another significant challenge.

Where could ISED technology be most beneficial? Is it particularly suited to certain environments?

Right now, we’re focusing on brackish silt waters which are not that salty – maybe 1,000 ppm to 3,000 ppm (parts per million), which is most of the groundwater in the world. Given the current costs, this technology makes the most sense for greenhouses that generate a lot of revenue and already have good water efficiency. The less water you need to treat, the cheaper this solution is.

Our technology also makes a lot of sense for areas that are under severe water stress. It will be very relevant for the Middle East and North Africa, for example, where we have already had interest from a number of producers. The combination of greenhouses, plus our technology, would enable more produce to be grown more efficiently in the Middle East. It’s already beginning to happen, and that’s a trend that will continue for many years to come.

In California, too, water is getting very expensive. Growers are concerned about how they can save water, and they’re already considering this technology because they’re concerned about the costs of water. This next-generation technology will replace reverse osmosis in the next couple of years and become the mainstay for a couple of decades.

How significantly, and how quickly, do you expect the costs of ISED to fall?

We’re aiming to be as inexpensive as reverse osmosis. For the first five or six years, we’ll focus on the greenhouse markets in North America and Europe. In six years, the costs will be low enough for us to sell to developing markets.

Your J-WAFS funding is for one year, until August 2018. Will your research be complete by then?

It should be enough for us to get to the next phase, which is piloting. We’ve evaluated the market and we should be able to get enough done for proof of concept. That’s where we’ll need to raise investment money to show that it works and gain the trust of the industry.

How quickly could you be out to market?

I’d say we’re less than three years away from the market. We need to see a year of piloting before other people would buy bigger volumes. It will take us two to two-and-a-half years to get to market. It’s not that far away. We’re piggy-backing on existing technology, improving it with our own sensors and physics-based software, and the sooner we interact with the industry in the real-world environment, the better and more quickly we can move and grow.

What has been the impact of J-WAFS on your research?

Most of the time when we do university-based research, we’re insulated from the real-world problems because we don’t do enough interviews with the right people to really understand what an industry’s problems may be. The J-WAFS Solutions program is the first I’ve seen that enables that kind of flexibility. Having the ability to travel, talk to real people and get their input is super-crucial if we want to solve global water and food security issues.

If it weren’t for the J-WAFS funding, this wouldn’t be happening. If every research grant thought the way J-WAFS does, students would solve more impactful problems and the world would be a better place sooner.