Could joined-up thinking on energy and water scarcity help to propel Saudi Arabia and other countries towards a cleaner, bolder, healthier future?

As Saudi Arabia continues to advance towards a clean energy future by investing in solar and wind energy, analysis from the World Resources Institute (WRI) suggests it could be a strategic decision with profound consequences.

The implications of this finding are significant: most traditional power production uses vast amounts of water to cool steam or power turbines, adding to the huge pressures on already scarce water resources.  Solar power production, on the other hand, poses no such challenges to water-scarce environments.

For countries like Saudi Arabia, where severe water scarcity is compounded by the expectation that energy consumption will treble by 2030, the need is particularly pressing.  Water supplies are under pressure due to higher than average per person use and rapid growth in industrial water demands. 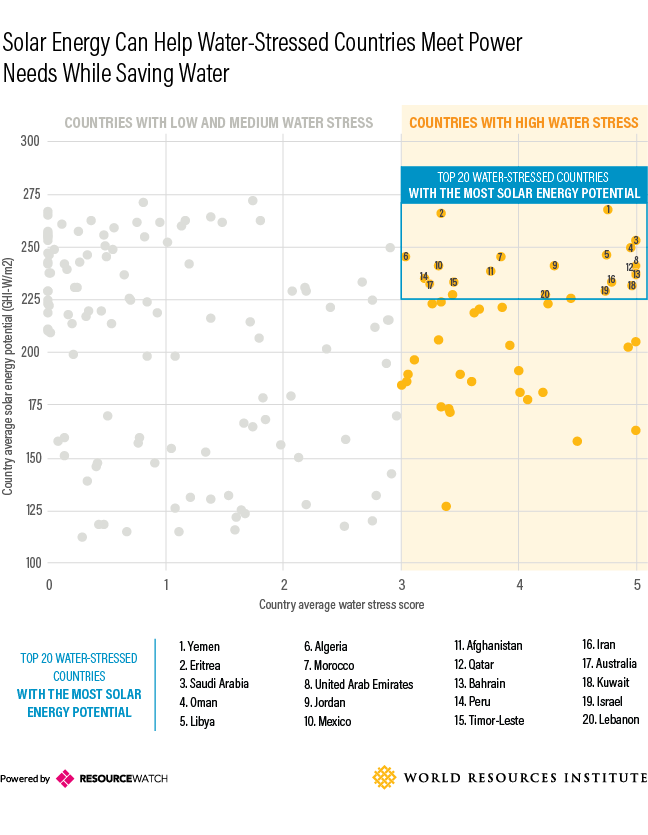 WRI analysis of the similar situation in India, however, demonstrates the potential gains that could be achieved by switching power production to renewable energy: the WRI found that if India meets its renewable energy targets, it could reduce its water consumption by more than 25%[3].  So the opportunities to ease the water stresses being placed on Saudi Arabia and other countries across the MENAT region are clear to see.

Furthermore, Saudi Arabia’s position in the ‘Global Sunbelt’ gives it an envious advantage over many other water scarce countries.  With some of the highest solar irradiances in the world (annual average daily global horizontal irradiance (GHI) is measured at 5700 WH/m2 to 6700 Wh/m2)[5], Saudi Arabia has the potential to dominate the solar energy landscape in the same way it has been a global superpower in oil. 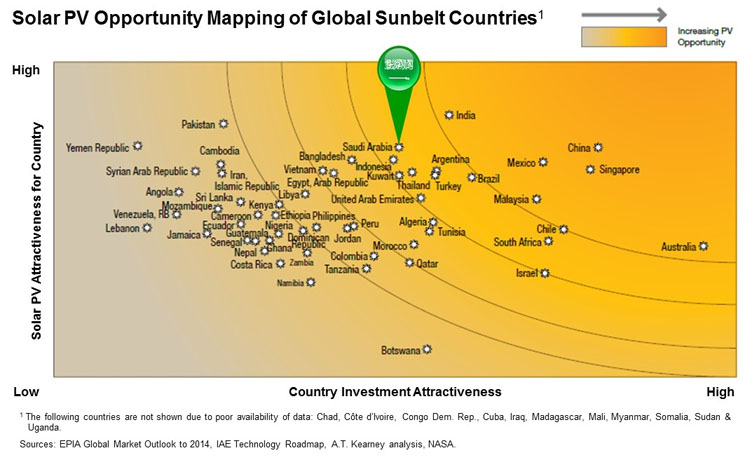 Through its wholly-owned renewable energy business Fotowatio Renewable Ventures, (FRV) Abdul Latif Jameel Energy is already working to help countries such as Saudi Arabia to capitalize on their enormous renewable energy potential.  Its leadership team can call on knowledge and best practice gained from installations as far afield as Chile and Australia, delivering a world-leading solution to some of Saudi Arabia’s most pressing natural resources issues.

“Abdul Latif Jameel Energy has been leading the way on developing solar projects in the region [and] … we remain committed to being the leading solar PV development company in the Middle East and beyond.”

It is not only solar power that could help to ease Saudi Arabia’s water scarcity issues.  It is also well placed to make use of the falling costs of wind power, ranking as the 24th water-stressed country with the highest wind energy potential[6] (Andorra, Belgium and Kazakhstan make up the top three).

With this combination of natural resources, together with commitment at the highest levels of Government and the expertise of industry leaders such as Abdul Latif Jameel Energy, Saudi Arabia has the potential to turn the challenges of water scarcity into an integrated sustainable-energy driven future.  In doing so, it can drive forward a precedent that could transform other water-scarce economies and deliver an enhanced quality of life for Saudi Arabia’s citizens.

[1] Which countries could gain the most from renewable energy? World Economic Forum, 17 May 2018

[2] These 20 Water-Stressed Countries Have the Most Solar and Wind Potential, World Resources Institute, 10 May 2018

[6] These 20 Water-Stressed Countries Have the Most Solar and Wind Potential, World Resources Institute, 10 May 2018